Managing the Don’t Shoot Yet

You Can’t Shoot Everyone

The word most often verbalized in shooting classes is “GUN!”  This is usually followed by a quick draw and center mass shot, hopefully!  We train to draw quickly and shoot.  We train to improve our split times.

In real world situations, do we ALWAYS shoot when we draw or shoulder our firearm?  Clearly the answer is no.  There are many situations where we may not yet have the legal or moral authority to shoot a subject but we do have the authority to have a firearm in our hand(s) and even point a firearm at a potentially threatening person.  In this series of articles we will examine the exact words to use and actions to take, when we encounter a person we need to control at gunpoint.

Most people can imagine a situation where they hear a noise in their house, arm themselves, and encounter an apparently unarmed individual in the living room. Is this person drunk and in the wrong house? Is he a thief? Or does he plan to murder your entire family?

In situations where we are unsure if the suspect has hostile intent or the subject has de-escalated (possibly he dropped a weapon when you turned the light on) we have have three choices:

1) Move them. Verbally instruct the subject to leave or move them to an area or place where they are positionally disadvantaged. Or:

2) Pin them in place. Verbally instruct them into a position of extreme positional disadvantage, allowing you dominance of the situation.

Of course, if the situation escalates and the individual becomes a lethal threat, at anytime, we could:

3) Decide the situation has risen to a level where deadly force is necessary and shoot to stop the subject’s aggressive actions.

The potential consequences of shooting an unarmed person, regardless of the actual circumstances, can be costly: financially, psychologically, and emotionally.  Of course, the decision may also cost your freedom.

If we cannot shoot every person we encounter when we have our firearm in hand, how do we control them?

Do you train to control a verbally compliant suspect?

Do you have a plan?

Craig Douglas (Shivworks) does an excellent job breaking down and teaching in extremis communication in his Managing Unknown Contacts (MUC) block of instruction. Douglas believes this information is so vital to managing any potentially violent confrontation, he includes this block of instruction with almost every class he teaches.

Douglas limits the verbal commands to orders which escalate in intensity, volume, and aggression, to stop the subjects forward motion and preserve distance between the unknown person and the student.

The MUC subject matter context is an encounter with an unknown person in a situation or circumstance in which a physical assault is possible. The unknown person is moving towards the student.

The student may or may not be armed, but the students weapon is initially concealed and not apparent to the unknown person.

During this block of instruction the students quickly learn defending themselves under a “task load”, by participating in a conversation with the unknown person, severely slows reaction time.

Students discover the unknown individual could use conversation to close the gap and bring himself within range to attack.

Our communication during a critical event needs to be automatic, trained, clear, concise, and NOT involve dialogue with the subject.  Douglas’ Managing Unknown Contacts instruction gives the student a verbal “script” to use to stop an unknown person who is coming towards them.  This preserves the distance between you and the unknown subject which gives you time to make decisions and increases the time it takes the subject to attack you.

Our first priority when confronting a subject at gunpoint is exactly the same as MUCs objective: MAINTAIN DISTANCE.  We want the person to essentially freeze.

MANAGING THE DON’T SHOOT YET

Confronting a subject with a loaded firearm presents multiple challenges.

If the subject is verbally compliant and not an immediate deadly threat, you have to give them concise and understandable orders to make them do what you want them to.

Your mind is under a task load because you are evaluating the circumstances, moving and communicating with a loaded firearm, possibly considering the consequences of your actions and the safety of your family or other people in the area of the confrontation, possibly holding a flashlight, and dealing with physical and verbal actions from the subject.

This task load will slow your reaction time.

Additionally, this all may occur in low light, with background noise.

Added task loading may come as inquires from your significant other and kids screaming and crying. The subject you are controlling may also be shouting questions or statements.

All of this creates a confusing environment which does not allow for you to make quick decisive decisions, unless you have trained exactly what to do, under realistic pressure.

You must have an extensively trained a plan of action prior to the event.

STABILIZE THE PERSON AND SITUATION:

We need to freeze the subjects motion so we can better evaluate the situation, preserve our distance from the individual, and evaluate if he will comply to verbal commands.

The most obvious way to stop the subject and evaluate if he is going to listen to verbal commands, is to issue a decisive verbal command.

In 2008, the Force Science Research Center at Minnesota State University, conducted an observational study to determine what commands, given by police officers, resulted in accurate compliance (http://www.forcescience.org/commandtypes.html).

A “COMMAND” was defined as any verbal communication, from a police officer, given to an individual, who was not another emergency service personnel and there was an expectation of a verbal or motor response from the individual.

Command subtypes were designated as Alpha and Beta.

Alpha commands are considered commands in which a verbal response or movement response was appropriate and feasible.

Beta commands are commands which are vague and might cause difficulty with compliance.

Between these command subtypes we see some commands which are more effective than others.

Beta Commands in action:
When I trained new detectives they would often phrase a command as a question in an effort to appear polite, to gain compliance.
In one incident, we had entered the home of a homicide suspect.  A brand new detective asked the suspect, “Could you come with us”? After some verbal resistance I told the suspect, “I need you to come with us”.
When asking a yes or no question we give the individual the ability to say no, even when we expect compliance.
Trying to be initially polite could lead to later conflict.  Asking an encroaching subject a question can continue the encroachment and initiate dialogue.
“I need you to come with me”.  Is clear and not a question.  If said in the correct tone and pacing, it sounds polite, but does not offer the individual a verbal out.
All of our in extremis commands should  be ALPHA commands

Our first objective in Managing the Don’t Shoot Yet. Is to decide if the person we are confronting is an immediate threat. If we can positively determine the person is a threat we have an immediate shoot situation which does not require any communication before shooting.

For example, I wake up in the middle of the night to a loud crash.  I hear someone walking up my stairs.  I arm myself and from a position of cover, see an intruder walking up my stairs with a gun in his hand. I do not need to challenge him.   Easy decision to shoot.  I can articulate I felt in fear for my life and the life of my family.

If we make the initial survey of the situation and are not SURE the intruder is an immediate threat our next objective should be to stop the subject movement.

The most clear, alpha command, which communicates our objective of stopping the suspect’s motion is “DON’T MOVE”.  This should be our first trained and ingrained command to a subject we are not going to immediately shoot.  Stopping them preserves range and allows us to visually evaluate the  circumstances and the surrounding area.  It also gives us a clear, binary, baseline to evaluate if the subject is compliant or not.  Does he continue to move after my command of Don’t Move?  Yes or no.  It gives me a reasonable baseline to describe my actions after the command is given.  If I tell someone to not move and they continue to move, I can reasonably articulate why they were threatening to me. 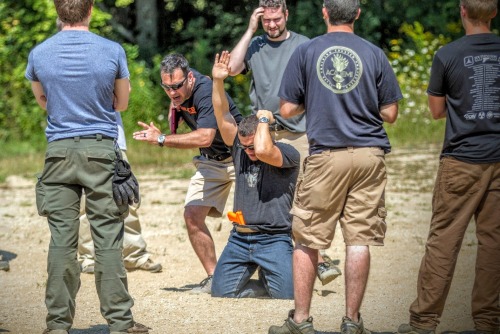 Larry Lindenman is a retired Illinois State Police Lieutenant. Larry was a SWAT instructor and Squad Leader, a Special Agent and investigative supervisor, and the Director of a multi-jurisdictional covert narcotics investigation unit.  Larry is a lifelong martial artist and currently instructs Brazilian Jiu Jitsu at the Carlson Gracie – Aurora Academy.

Filed under Managing the Don't Shoot Yet, Tactical Communication

16 responses to “IN EXTREMIS COMMUNICATION, PART 1”